You play as an anthropomorphic cat trying to deliver a love letter.

Wasd to move, J to jump, K to dash, L next line of text

Arrow keys to move, C to jump, X to dash, Z next line of text

not a bad game conceptwise and lorew wise, just the wall jump especially+the dash seems to be.. lacking something.
for example you cant just mash the dash button to do 3 consecutive dashes. no, you gotta wait until one dash animation is done before you can dash again. pressing it during an active dash animation jsut wastes an orb without any benefit.

like I mash the jump key and it should quickly climb up a small corridor.when in fact it barely moves upwards at all, in my perseption.

walljumped up to a point where you are technically still on  the wall but the ledge is right above you?
well, too bad, with a 70% chance you are too close to that ledge and therefor walljump wont work.
at least thats how it felt often.

got 10 roses and the rick roll, so I mksut have find most eastereggs.
I know exactly where to go now, but with that (i dont wanna call it bad, cause it aint, it could just behave better ) movement set, that is kind of hard.

will try it nonetheless cause my parents didn't raise me a quitter! >:-D

Seeing how intrigued mentioned basically all I had to say, but better, theres not much left to say.
he even mentioned the thing were, if you stand in a corner and jump, it performs a wall jump; when in fact you only want to jump up.
so you always need to keep a tiny distance from the wall so you can jump straigth up.
little annoyance, nothing more.

but good game nonetheless, in a way it reminded me of celeste (was that it's name?).
a game I will never play cause super precise dash-jump combos arent my thing but in a short metroidvanis like this I can deal with it :-)

difficult curve, sure, you either manage to do these jump dash-wall jump combos or you die trying.

since I am used to platformers and metroidvanias, wasnt much of a big deal (aside from difficulites caused by the kind of sloppy movements themselves, as mentioned).


good game, despite the bashing sounding critizism.
if it wasnt good I wouldnt even leave a comment :-)

Thank you for the criticism. I plan on doing a overhaul of the game to make the game feel a lot better, I dont have a lot of experience programing so critique is helpful. Also you indeed got all the secrets lying around, and celeste was my main inspo for this game.  (Momodora also but thats less obvious.)
thanks for commenting!

I enjoyed what went into this. 10 flowers, ~76 deaths (it reloaded when I made an itch.io account to comment but I know it was in the 70s), and 1 rick roll.

I liked the animations and sound design/music. There are some bugs, but nothing too major. if you dash right before death, it buffers and executes the dash immediately upon respawn, which just leads to an additional death here and there mostly. If you jump right in the corner from ground, it wall jumps instead, which is a minor annoyance when I want to jump straight vertically along a wall from standing. I did find a way to work around it in gameplay though.

Last bug that I found casually was if you dash  and dash again before the animation plays out, it eats your dash without executing it, which just forced me to find the correct timing window in some sections, I would say ideally buffer it and just have it execute it when the previous one is played out, or less ideally just have it not consume the dash.

I saw your reply about the wall jump being disliked, I think the reason is that it feels slippery. Maybe try to give a half second(play around with that number) of time before you start sliding down. Or buffer it so if you press jump slightly before hitting the wall it will execute immediately, just to give a larger input window before sliding begins. Maybe try a combination of both. Another thing much less necessary but might be something to try out, have sliding down be slower than just midair falling, cause the friction of the wall slows your descent is my thought train.

Difficulty wise I liked it, I have some experience with platformers like this though. I think the reason it feels too difficult to others is that the game isn't long enough for a proper difficulty curve, which is understandable as the only fix for that is to just make more so you can fit a curve in which is a time sink.

This comment got way longer than I initially planned but take that as a good thing, I feel your game is worth putting my time into giving feedback on. Overall well built, charming game with fun collectibles and exploration vibes. If you read down to the bottom can you tell me if I missed any flowers or if I got all 10.

Wow thank you for your in-depth response. I must have missed it, I got a little overwhelmed at how many comments appeared. so sorry for the late reply.

and yes you did get all the flowers, your the first one I've seen get all them.

This is a pretty good game, but the wall slide/jump mechanic is a bit.. idk.. unreliable? Got 9 flowers, 220 deaths. The ending was a bit underwhelming, could use like a % complete screen or image+text or animation or something.

I wanted to add more but was short on time because of life. Thank you for your feedback.
Glad to hear that some people are finishing the game since I think I made some of the levels a bit harder then I would have liked them to be.
It seems like the wall jump is widely disliked what do you think could make it feel a bit better. 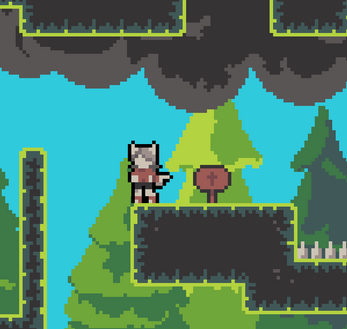